Here are some of things we’ve been working on the past week.

We have a new main character design, check him out!

In the game I added a little randomness to the blinking part of the idle animation so it’ll feel less looped.

Also I’ve implemented an idle state, where you’re being followed by a fly, which will be slapped automatically once it hits you, you can see it in the video below (slap animation is temporary).

I’ve also written and recorded a sketch tune for the map layout, listen to it in the video below.

You will also notice that I added more info to the map layout, these are not fully designed yet, the plan is to show the total game playing time and the best time for each level, show how many levers there are in each levels and how many you’ve already switched on, I might also show the total amount and remaining amount of coins for each level.

Besides that I’ve worked some more on the levels design and decor and fixed some game logic and gamepad controls issues. 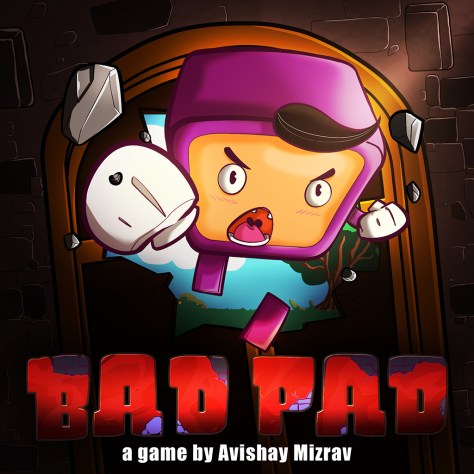 And don’t forget to vote for Bad Pad on Greenlight!

The past couple of weeks have been a little slow with the game production since I had to direct my attention to other matters, the first one was getting a Steam Greenlight page, with some updated screen shots, game information and of course a new trailer, which was also quite some work, here it is, check it out!

So once I got everything done I needed to start reaching out to the media for coverage and gamers for votes, I’ve done some extensive online research and sent a press release to a decent amount of gaming magazines, mostly indie, posted on related forums and social groups and also reached out to some youtubers, but there is still a lot to do and people to contact.

So far we got 343 yes votes on steam, we need around 1000 to even be considered (though I’ve heard of cases where games got greenlit with less), all and all our rank is growing, daily, but slow, hopefully once some of the coverage goes live we’ll get more traffic and votes.

Here are a couple of guys trying the demo.

Today, Feb 18, Gamescroller will run a live stream of the demo on his twitch page, streaming starts around 18:30 (GMT) drop by!

Here’s the stream if you missed it!

Join us tomorrow, the 19th, 19:00 (GMT) for another stream!
Watch live video from Gamescroller on www.twitch.tv

We did add some new graphics and I worked on some of the levels, but nothing worth mentioning, although one thing that is worth mentioning is that I started working on the 2nd floor boss level, this one will take place underwater, here is a preview of what’s done so far, note – submarine and evil-X ship are not designed yet.

Hi Everybody!
I have opened up a Steam Greenlight page for Bad Pad, please support my game by voting it up!

Also here is a new promo video I made and a rare opportunity to hear me sing, even if it’s just two words 🙂